Mainly, The purpose of this project was to further our understanding of basic photosynthesis rules and compare the chemical compound levels in comparisons to Monocots vs. Dicots. What I got out of it was pretty much the same thing as everyone else; knowing the difference in carbon levels in plants, and finding certain methods for carbon levels. So pretty much the light gets absorbed through the leaf, also carbon, co2 and water all get soaked up in the leave and come out as sugar (glucose) and oxygen (o2). This picture shows briefly how the Calvin cycle works for a plant and how fast water turns into oxygen.

Based on the graph, we know that in the vacuum, there was 0 leafs dropping for the last 4 minutes. Then it substantially increases to 4 and 7 in less than 7 minutes. But once we get to 10, it is a straight constant for what seems like a millennia. My prediction is no matter how much time we put it in the vacuum, there will still be 2 floating and 8 at the bottom of the cylinder. The light and leaf source, we used the dark, skinny leaf with almost not canes on the pieces. The type of light we used was yellowish like the sun, but it was a heat lamp so it has to be different. We kept it approximately 1.45 feet away from the lamp for 15 minutes. No new data found in comparison to the last 20 minutes. 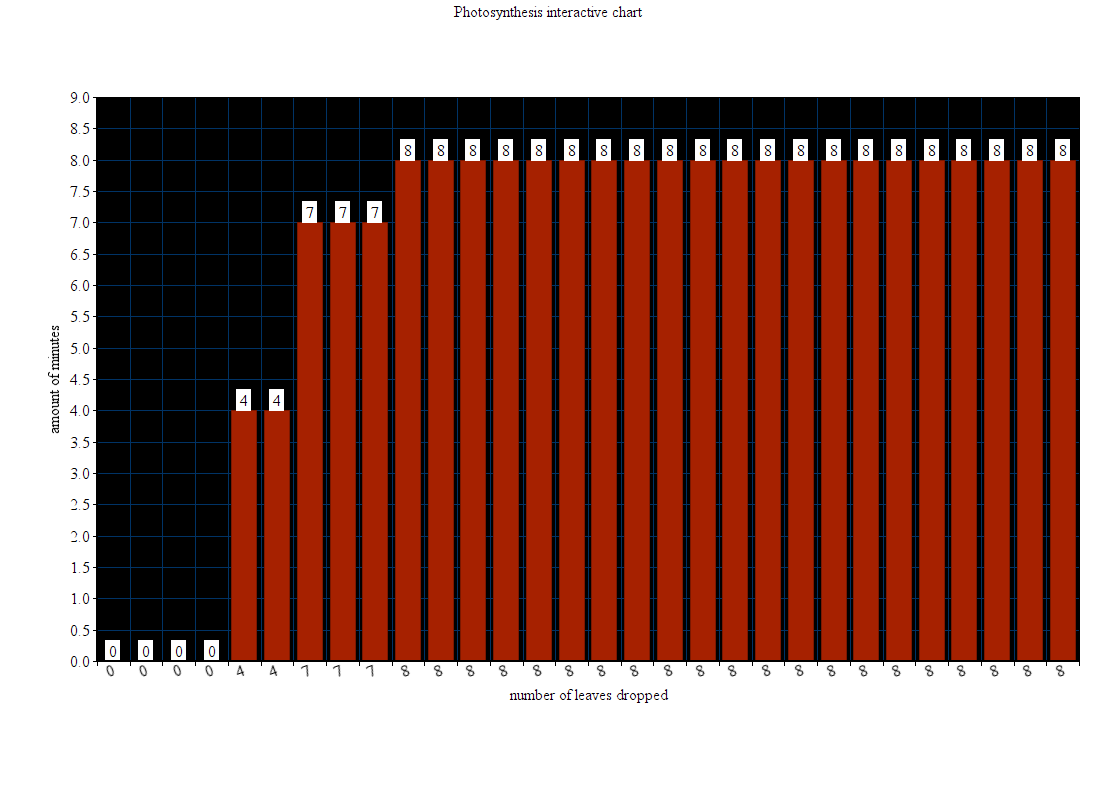 (All Pictures are arranged towards day in relation to number, Example: 1st Picture is the 1st day)
The purpose of this lab is to be able to tell the difference between a Monocot and a Dicot plant. Another purpose is to remember the characteristics of both types of plants. Although I believe the main purpose is to get us used to doing write ups for labs. I believe that both of the plants (corn and mung beans) are Monocots just because their growth is relatively the same. Other relations, I think are that both type of plants are Monocots only because of how rapidly they really grow. Another reason I think they're Monocots is because they grow so fast within a 3 day time span, both plants already grew leafs within that short of a time period. Monocots are the one out of 2 that can grow that fast. Some of the clear observations I've made were these type of beans and corn grow exponentially in comparison to something like a tomato or a maize plant. Another thing I noticed was that Summer was really prominent about synthetic soil (Damp towels) Instead of real soil. I think its because she wanted to see how the plants develop through certain scenarios and factors. The last observation I made was that certain types of chemicals make the seed grow faster with Windex (small, 5 ml traces of it) the Windex might be acting like a pesticide but the real answer comes from those that actually did that type of factoring. Our plant was expected to die from the amount of Windex, and it did quickly. Definitely not much different than the rest. Yes, I did forget to water my plant over the weekend. No, we did not really change our variables the entire time except when we flooded the cup with Windex. the florescent lights and 30 ml every 3 days was really all we did.

1) Our project will investigate if sudden changes in velocity can affect plant growth. Plants are normally stand-still creatures and they don’t move fast. We are testing if changing this will affect their growth and growth rate.
2) The significance of this experiment is to show how plants would survive off world or in space. Given that climate change rate is accelerating, our only option is going to be survival off the planet Earth. And since plants make a lot of oxygen for us to breathe, we have no other option that to bring them along for the ride.
3) I wouldn't really change anything other than actually measuring the string we used to drop it so it wouldn't hit the ground and make a mess.
4) Why is sample size important?​Sample size is important because in order to get more accurate data you have to have multiple plants. For mine and Landon’s project we did a total of 40 plants, 20 for our control group and 20 for our experimental group. It’s always important to have a sample size because like mine and Landon’s project some plants didn’t end up growing but we still ended up with a decent amount of data. When you don’t use sample size for experiments like this, if the plants end up dying or not rooting you won’t have any useful data.